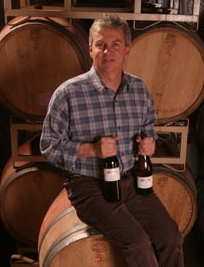 Chuck was an industry pioneer who introduced new varietals to the Sierra Foothills and was instrumental in establishing the wine industry in the area. He will be missed by everyone who was lucky enough to have known him, and to have enjoyed his wines.

Chuck started his career at J Lohr Winery in San Jose, where he worked for six years. It was great on the job training.

Haven fallen in love with the Sierra Foothills on a quick visit through the area, Chuck was thrilled when he was offered a position at Stevenot Winery as Assistant Winemaker. Five years later in 1988, he was promoted to Director of Winemaking in charge of all production, and so began a Golden Age for Stevenot Winery. He brought the winery national recognition, receiving over 500 medals at major wine competitions and repeated favorable reviews in major publications and newspapers.

Over the last two decades, Chuck, with his pioneering spirit, created some of the most impressive and innovative wines that the Sierra Foothills American Viticultural Area (AVA) has seen. He introduced such varietals as Tempranillo, Albarino and Verdelho into the mainstream market. Chuck's winemaking style and finesse was unmistakable – his passion was contagious.

The 2008 release of Chuck's 2007 Chardonnay marked the realization of a lifelong dream, one dedicated to producing the finest wines the Sierra has ever seen ... with the Hovey name on the bottle!

Chuck quickly added the Hovey Tempranillo, Petite Sirah, Barbera and Viognier. Production and sales doubled in less than a two-year period.Since then, several other varietals have been added, including the Isabel Cabernet Sauvignon, Zinfandel, Cinsaut, Sangiovese Rosato and the C2 White and Red blends. Winery growth and expansion continue upwards!

Team Hovey is committed to honoring Chuck’s memory by continuing to produce wines in his signature style – wines that he would be proud to bear the Hovey name.